Voting is now open for the Community Choice Award 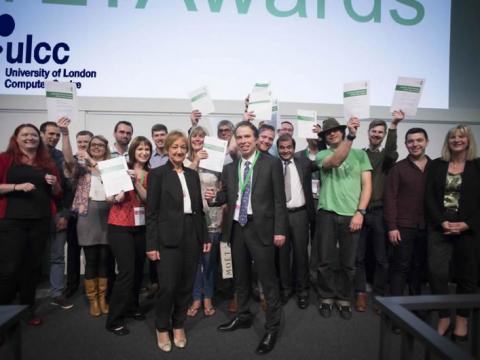 The ALT Learning Technologist of the Year Awards 2016 will be presented at the ALT Annual Conference in Warwick, on September 7th 2016

Voting is now open for the Community Choice Award: Find out who the finalists are and cast your vote.

Established in 2007, the ALT Learning Technologist of the Year Awards celebrate and reward excellent practice and outstanding achievement in the learning technology field, and aim to promote intelligent use of Learning Technology on a national scale.  The Awards are open to individuals and teams based anywhere in the world. The 2016 Awards are sponsored by CoSector – University of London.

The Awards were judged by a panel chaired by Martin Weller, Vice-Chair of ALT and Professor of Educational Technology at the Open University. The panel includes:

The judges choices for individual and team awards will be announced at the awards ceremony at the Annual Conference on the 7th September, however, we are also giving everyone the opportunity to vote from the judges shortlisted finalists to select this year’s ‘Community Choice’.

There are two ways to vote via email and Twitter. Voting will be limited to one vote per account. Your account details (email addresses and Twitter screen names) will not be used for direct marketing or passed by ALT to third parties). All voting closes at noon (BST) 7th September.

Tweet a message with the hashtag #altc and the tag of the person or team you wish to vote for. For example, to vote for Iain Griffin your tweet should include ‘#altc #LTA1’. You are allowed to include other text/links with your tweet. On the voting page, We have prepared the links labeled ‘tweet’ which compose a suggested tweet for you to edit. Retweets will not be counted. Only publicly visible tweets will be counted. If a Twitter account tweets more than one vote the last vote will only be coun

Voting is now open for the Community Choice Award: Find out who the finalists are and cast your vote.