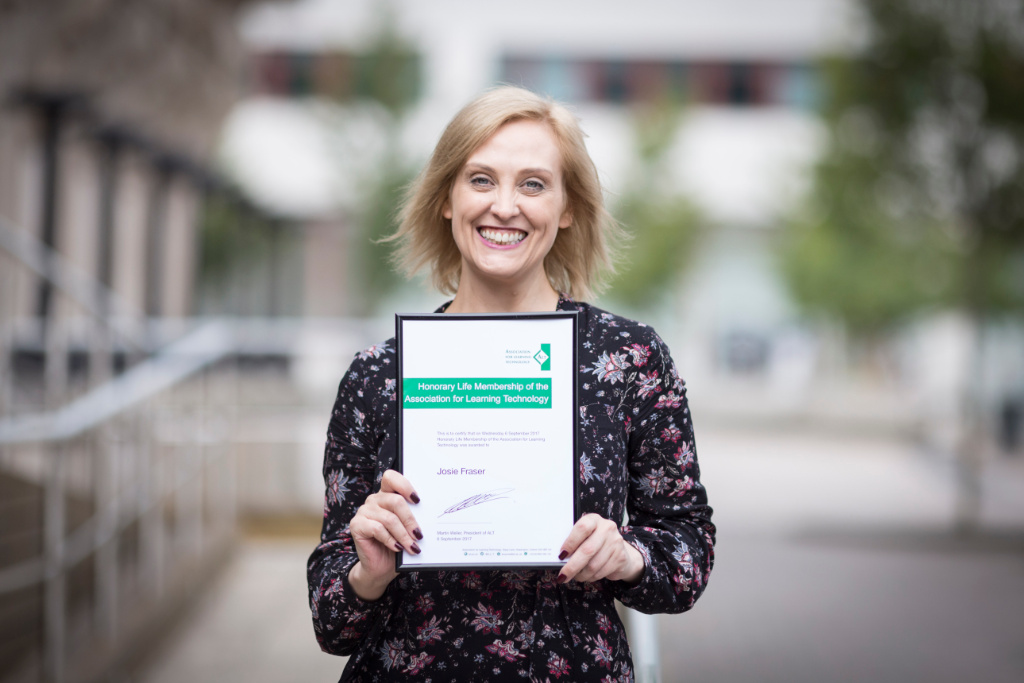 ALT awards Honorary Life Membership to individuals whom ALT believes have made an outstanding and sustained contribution to the advancement of ALT's aims for the development of learning technology in a regional, national or international context through research, practice, policy-development, leadership, or a combination of these.

During this year’s Annual General Meeting on 6 September 2017, Josie Fraser was recognised for her outstanding contribution by being awarded an Honorary Life Membership of ALT. Josie Fraser is a member of the UK Government’s National Technology Team, based in the Department for Digital, Culture, Media and Sport, and Chair of the Board of Trustees for Wikimedia UK. She previously worked for Leicester City Council, on one of the UK’s largest and most accelerated school building programmes, and led on all aspects of technology for the programme. She also created the award winning DigiLit Leicester project to support and develop staff digital literacy.

Professor Martin Weller, President of ALT, commented, ‘What I most admire about Josie is that she really gets stuff done. In fact, if there was an ALT award for getting stuff done, she’d be a prime candidate. From setting up schools, chairing conferences, getting the UK ed tech blogging scene up and running, advising on cyberbullying to chairing Wikimedia UK,  it makes the rest of us look rather complacent. She has been hugely influential in the UK ed tech scene and has an international reputation as a thoughtful, practical, caring voice in ed tech.’

Reflecting on the award being made to only the second female recipient, with Professor Diana Laurillard being the first, Dr Maren Deepwell, chief executive of ALT, added, ‘Honorary Life Membership of ALT is designed to recognise individuals who have made a big impact over a long period of time, individuals who are role models and influencers with a vision that shows the path forward. Josie’s work spans different sectors, policy makers and practitioners across the UK and sets a hugely inspirational example of how the potential of Learning Technology can be harnessed to change things for the better. I am proud to see our community recognise her leadership and her achievements now and those yet to come.’

Speaking about the award, Josie Fraser said, ‘I’m overwhelmed to be honoured by ALT in this way. ALT sets the benchmark for professional practice in the field of educational technology, not just in the UK but internationally - so this is pretty much the highest accolade I could hope for. I’m extremely grateful to ALT for all the support the organisation has provided me with throughout my career, and to the wider ALT community for being a constant source of inspiration and encouragement. I’ll do my best to live up to the significant expectation the award confers, and continue to champion the ways in which educational technologists can help make positive, life-changing differences to people's experiences of learning and education.’