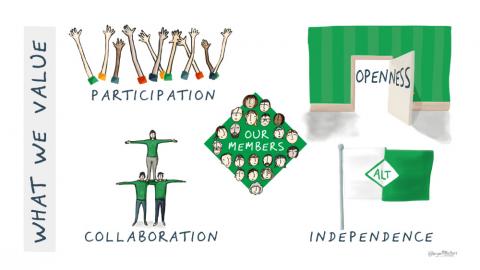 ALT’s members are invited to attend this year’s Annual General Meeting (AGM) to be held at the McEwan Hall, University of Edinburgh, UK, Wednesday 4th September 2019 (time to be announced when the Agenda is published).

In accordance with the ALT Constitution adopted in 2014, (http://www.alt.ac.uk/about-alt/how-we-are-governed/alt-constitution) the business of the Annual General Meeting will include:

a)   the election of Trustees;

b)   the appointment of the Vice-Chair;

d)   decisions on any resolutions.

The Agenda for the AGM will be issued at least two weeks prior to the meeting. All papers for the AGM and related information will be published here https://www.alt.ac.uk/about-alt/how-we-are-governed/agm .

The quorum for the AGM is twenty-five members of at least 12 months’ standing. Individual and Certified members and the representatives of organisational, partner or sponsoring members have one vote each (Associate Members are not eligible to vote).

Any resolutions for consideration at the AGM should be marked “AGM” and sent to arrive by 9 July 2019.

Items may be submitted to Maren Deepwell, Chief Executive, maren.deepwell@alt.ac.uk .

Call for 2 Trustees and Vice-Chair

We invite nominations for 2 Trustees to serve an initial three year term to be elected by Members.

We are also seeking expressions of interest for the role of  Vice-Chair of the Association to serve an initial three year term to be appointed by the Board of Trustees (formally called the Central Executive Committee).

The new Trustees will join the Board of Trustees which governs ALT.  For more information on the role of Trustees go to http://www.alt.ac.uk/about-alt/how-we-are-governed/being-alt-trustee.

The ballot for any contested vacancies will be conducted over the Internet by the Electoral Reform Services and the result will be communicated to members at the AGM. All eligible members will be sent an email with instructions on how to use the secure Internet ballot site. It is vital that you check that the e-mail address currently used for your account on our website is correct by 9 June 2019. To check your details, go to https://www.alt.ac.uk/user  and sign in to your account. The Members Area will display your registered email and ‘Update’ link if you need to change it To update your details, enter them into the relevant field and click 'Save'. In case of difficulty, please contact us via http://www.alt.ac.uk/contact.

Under the ALT Constitution, election is open only to individual members of at least 12 months' standing and aged 18 years or over on the date of the AGM at which they take up office.

In accordance the Constitution, Trustees coming to the end of a first three-year term are eligible for re-election as Trustees; and any elected Trustee (with the exception of the Vice-chair, Chair, and President) is able to put forward an expression of interest to become Vice-chair. (Thus the maximum continuous period of membership for a Trustee is six, or, exceptionally, between six and nine years.)

Deadline for submitting your nomination or expression of interest

All nominations should be submitted by Monday,  10 June 2019.

Download a PDF version of the 2019 AGM Calling Notice and Trustee election.